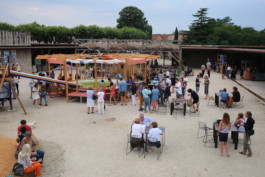 THE COURSE OF THE WATER, THE COURT AND THE WATER

Architecture and landscapes in La cuisine, art and design center

In July, La cuisine's programme will be based on two weeks of construction workshops to create convivial spaces around water (designed by the European collective Constructlab) and, in the last week of July (26 July-1 August), on a sequence of reflections, also instituted by workshop formats (coordinated by the philosopher Matthieu Duperrex).

While the pandemic continues to hover over cultural organisations and festivals, the general principle of this festival sequence at La cuisine is... not to hold conferences! Let's face it, there are plenty of conferences on YouTube and intellectuals have all given them in large numbers due to the confinements and travel restrictions. Let's add that it would be ridiculous as well as perilous to offer the public two hundred chairs lined up in the middle of a courtyard.

The alternative, the idea, is to build workshops together, which put us at work between inhabitants and artists-authors, so that we can exchange between peers, inhabitants, audiences and amateurs in confidence, and so that each one can leave inflated by the energy of all. Workshops on what? The challenge for a cultural institution that wishes to be more in touch with its territory in a context of ecological upheaval is to land, and to reconnect the arts to the "real country", with all the ambiguity and the swerves in meaning that this expression means according to the socio-political contexts. Hence the need for high intellectual standards coupled with a democratic ambition for accessibility.

Our festival proposes to start thinking about the productive country and rurality. Mapping the resources, expressing the ways of sustainable transformation, saying what is the soil of a breeder, of a farmer today, working also with the second, or even the third generation of "neo-rurals" who populate the surrounding causses and give impetus to dynamics that are often unsuspected by the urban population... Starting with a first review, From an initial survey of motivated actors and inhabitants by the teams of La cuisine and the community of Négrepelisse, between February and June, workshops will be held in July to describe and poeticize the links and places. The architect curator of Constructlab, Alexander Römer, is making a proposal based on the Aveyron river which flows a few meters away. His playful structures will allow us to adopt various postures and discussion arenas in order to infuse discourse, distil speech and irrigate thought.

The collective project "Elles Aveyronnent" led by Anne-Sophie Milon, Marion Albert and Tomas Matauko has been investigating the Aveyron for several months to make us sensitive to the mineral waters on the scale of the kitchen. As for the philosopher Matthieu Duperrex, the writer Camille de Toledo (based in Berlin), who is finalising the report of the Loire Parliament, they will address the question of the political economy of the earth and the "work of the living". Finally, the philosopher Joëlle Zask will propose exploratory views on the rural commons and futures.

The aim is of course for all this to work in synergy, interpenetration, without solitary machinery during this week that could be called a summer academy or a new floral game. The desire is that our guests leave happy, with ideas for their respective works, because of these exchanges with their peers and the inhabitants, and that the art centre inherits a cartography for its landing, without evading the controversies and battlefields. And that we can sketch out projects and materializations for the post-pandemic.

TO DISCOVER IN LA CUISINE 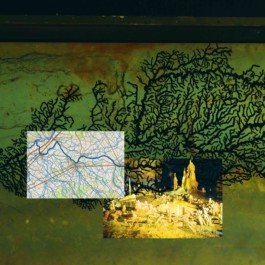